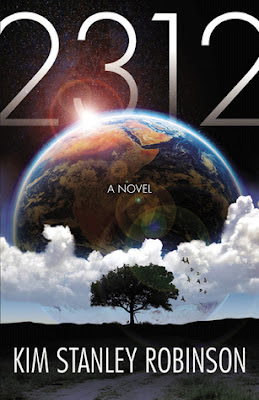 The year is 2312. Scientific and technological advances have opened gateways to an extraordinary future. Earth is no longer humanity's only home; new habitats have been created throughout the solar system on moons, planets, and in between. But in this year, 2312, a sequence of events will force humanity to confront its past, its present, and its future.

The first event takes place on Mercury, on the city of Terminator, itself a miracle of engineering on an unprecedented scale. It is an unexpected death, but one that might have been foreseen. For Swan Er Hong, it is an event that will change her life. Swan was once a woman who designed worlds. Now she will be led into a plot to destroy them.

My Thoughts:
I have an odd relationship with Kim Stanley Robinson.  I remember reading the Mars Trilogy, years ago, and liking it quite a bit.  Based on that memory, I often pick up his books, read them, and then sort of vaguely wonder why did I read that, and what was it about anyway?

"2312" kind of falls into this same category.  I've been looking forward to reading it for months.  The general idea sounded amazing.  Robinson has an awesome imagination, and his world-building is off the charts, so I knew there would be lots of fantastic stuff to read about.

In this, Robinson doesn't disappoint at all.  He has imagined a future solar system where humans have spread out from the Earth and inhabit many planets, moons, and asteroids.  Mars is terraformed, Venus is in the process, and an enormous city glides across the surface of Mercury on huge rails, always staying just ahead of the fatally destructive sunrise.  While Earth still suffers under the weight of failed political systems, insufficient resources, and crushing poverty, the Spacers have formed innovative governmental systems based on survival and cooperation, with Artificial Intelligences known as Qubes that help run things and keep track of everything that needs to be known.  Longevity treatments, physical and mental augmentations, all these and more are available to this futuristic society.  Exploring Robinson's creation is awe-inspiring, amazing, and often thought-provoking as he speculates about social and cultural evolutions.

Unfortunately, it is difficult to define what the story is actually "about."  First of all, the publisher's "back of the book" blurb is extremely misleading:  There is an unexpected death before the narrative begins, but I didn't see anything to lead me to believe that the death could have been foreseen.  True, Swan spent years of her life designing worlds, but she isn't led into a plot to destroy worlds, although she does become part of an investigation to find out who might want to destroy worlds.  And to my recollection, at no point was "humanity" forced to confront it's past, present and future.

The plot is nebulous and scattered, and dozens of pages will pass without anything actually "happening."  People think about stuff, and talk about things, and there are large sections of info-dumps.  When things do happen, they are exciting and amazing and mind blowing, but they just don't happen very often.  The story is part mystery & part love story, both of which seem to take a back-seat to the travelogue & history lessons, and ultimately the mystery and love story both felt somewhat unsatisfactory.  Most of the characters are either unlikable, or incompletely formed, with the exception of one side character whose storyline ultimately seems to go nowhere.  And personally, I cannot for the life of me figure out why the love story happened at all, as the neither character was more than passably interesting and in some cases were downright annoyingly awful.

And yet there are scenes here and there, tucked into unexpected places, that are so incredibly amazing and wonderful.  Animals drifting down through the sky in protective bubbles, surfing on the rings Saturn, the landscape of Mercury transformed into amazing works of art.  Some of the ideas and imagery that Robinson evokes are so stunning as to be almost indescribable.

There's a heavy theme of created intelligences gaining some sort of sentience and becoming indistinguishable from humans, which leads to what I felt was an amazing plot twist near the end, but this plot twist is so subtle that most reviewers seem to have missed it completely, and the narrative doesn't actively confirm the readers' suspicions about what may or may not have just happened.  Certainly the characters don't seem to realize anything, which leads back to the vague feeling of dissatisfaction that I had upon finishing.

One point that many other reviewers, both positive and negative, have touched on, is the formatting of the story itself - the chapters are interspersed with short sections of "lists" and "extracts" almost as if someone was gathering information from the (future) historical contexts and filing the information for future use.  Most people seemed to strongly dislike these brief interruptions in the narrative, but they didn't really bother me much, although they can get dry and dull, as info-dumps tend to do.  But as I got closer to the final chapter I began to think that these "lists" and "extracts" may have had something to do with the plot twist and the revelation near the end, but again it was so subtle that I'm just not sure if the connection was really there or if I merely imagined it in an attempt to make the narrative more interesting.

My final verdict?  I'm unsure.  Despite all the cons, "2312" really is an amazing novel.  And despite all the pros, it's really an awfully unsatisfying story.  I think I'm going to split the difference and give "2312" three stars - I liked it, but as with many of his previous novels, I'm left wondering what it was really about, if I missed something, and why did I read it in the first place?

Have you read "2312" yet?  Do you plan to read it?  Do you agree or disagree with my thoughts about the novel?  Please leave a comment below and tell my YOUR thoughts!!
Posted by SunnyReads at 6:00 AM